The CFX Board voted unanimously on March 8, 2018 to conduct Project Development & Environment (PD&E) studies on the two corridors, which could add 22 miles of expressway.

The two corridors were among four Concept, Feasibility and Mobility Studies that CFX conducted over the last year. The Board accepted the findings of the other two studies, deciding to revisit the Southport Connector Expressway and the Northeast Connector Expressway corridors as conditions warrant. More than 40 people provided public comment during the Board meeting.

“The community’s engagement has been so robust throughout these studies,” said CFX Board Chairman Fred Hawkins, who also chairs the Osceola County Board of County Commissioners. “I’m very proud of how citizens from throughout this region – especially from Osceola County – came forward to be a part of this process and to have their voices heard. Many of the corridor alternatives in these studies are a direct result of that vital public input.” 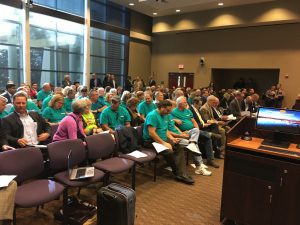 More than 40 people spoke during public comment at the March 8th Board meeting at CFX headquarters.

The studies will determine a recommended alignment, or route, for each of the two proposed corridors. Public involvement and input will continue to be a crucial component of the study process.