The Central Florida Expressway Authority (CFX) began construction of its five parkway sections in 2015. Since then, CFX has built 10 miles of the parkway with a total of more than $271 million in construction costs. The entire $1.6 billion Wekiva Parkway will complete Central Florida’s beltway by 2023, while helping to protect the natural resources surrounding the Wekiva River.

The Federal Highway Administration (FHWA) in May 2012 approved the Wekiva Parkway, a 25-mile toll road that will complete the beltway around Central Florida. The FHWA issued a Finding of No Significant Impact (FONSI), accepting the location and design concept. The approval meant the Proposed Build Alternative from the Wekiva Parkway Project Development and Environment (PD&E) Study could move toward design and construction.

The Wekiva Parkway Project Development and Environment (PD&E) Study was initiated in 2005 under the joint management of the former Orlando-Orange County Expressway Authority (succeeded by the Central Florida Expressway Authority, or CFX) and the Florida Department of Transportation (FDOT), District Five. The study engaged elected officials; federal, state and local agencies; environmental agencies and advocates; and community members in developing and evaluating alternatives that met the region’s transportation needs, while also seeking to minimize public and environmental impacts. 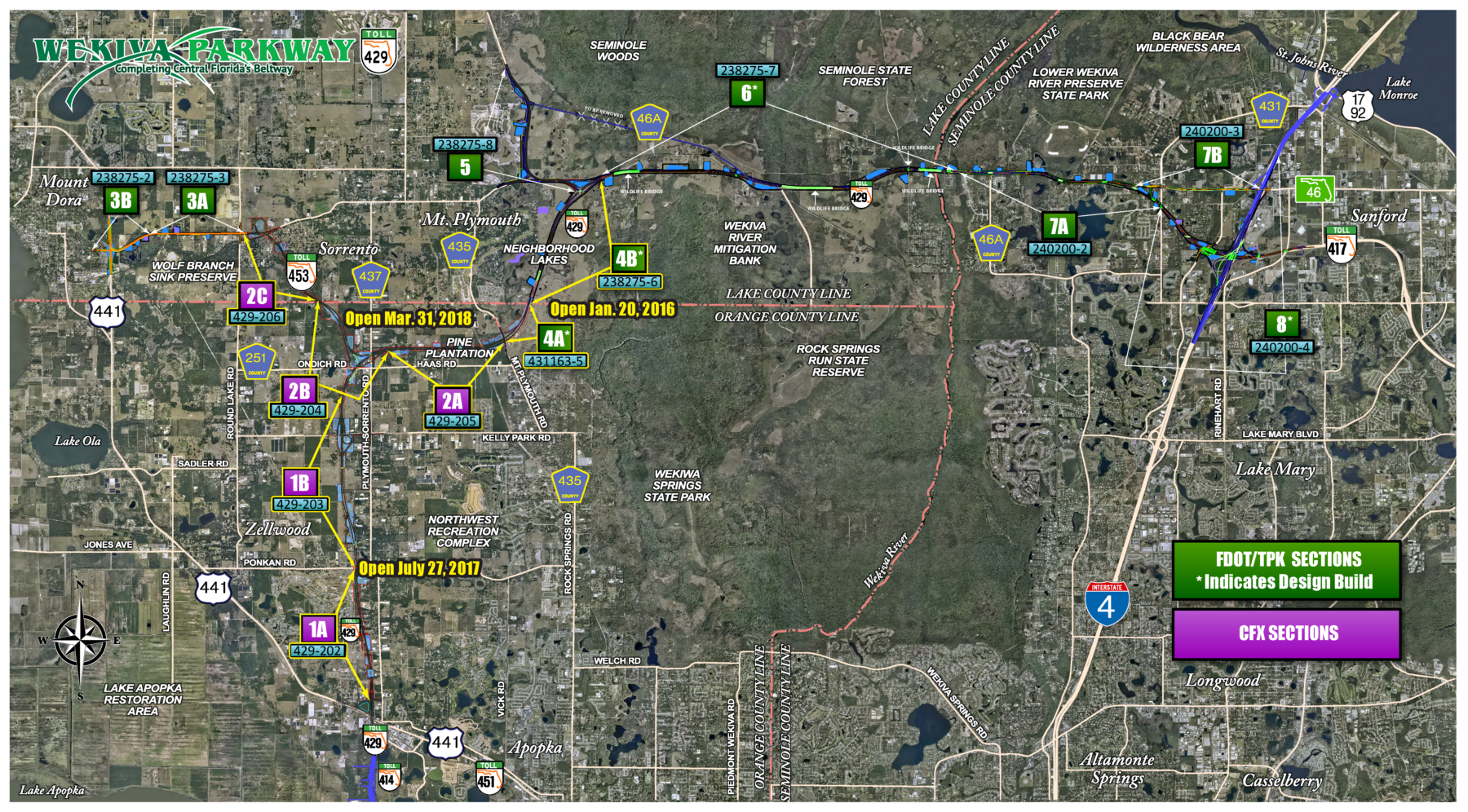 What is a PD&E Study?

A Project Development and Environment (PD&E) Study is the formal process that transportation entities, such as CFX and FDOT, use to ensure that consideration is given to engineering design, project costs, environmental and social impacts and public input in the development of major transportation projects.

The basic steps of a PD&E Study include data collection, development and analysis of the alternatives, development of project documents and final approval. Public involvement is a very important part of the PD&E Study process. There were 10 public workshops and hearings and more than 400 stakeholder meetings during this study for the public to have provided input on the project.

The activities of the PD&E Study addressed recommendations outlined in the Final Report of the Wekiva River Basin Coordinating Committee and set forth in the 2004 Wekiva Parkway and Protection Act (WPPA). The Coordinating Committee’s March 2004 report followed two years of intensive community input. The WPPA also established the Wekiva River Basin Commission, which was responsible for ensuring the implementation of the provisions of the act. Information on the Commission and other Wekiva information are available on the East Central Florida Regional Planning Council website.

As recommended by the Lake County Commission, the Wekiva River Basin Commission and the Florida Department of Environmental Protection (in keeping with the mandates of the Act), the plans in east Lake County eliminate State Road 46 as a through road from the Neighborhood Lakes area eastward to the Wekiva River. Subsequent financial analysis determined the parkway would only be feasible to build and operate as a tolled facility.

Citizens in the east Lake County area who live and work along existing State Road 46 expressed concerns over paying a toll for a local trip. In 2009, the Expressway Authority and FDOT began analyzing options to provide a non-tolled service road in east Lake County along the Wekiva Parkway route. In response to those citizen concerns, a service road concept was developed and incorporated as part of the PD&E Study.

While the required planning process for the parkway was underway, several key factors of the Act also were accomplished. The Expressway Authority and several agency partners finalized the purchase of the 1,619-acre Neighborhood Lakes parcel in Lake and Orange Counties in 2007, and the Pine Plantation, a 385-acre parcel in Orange County, in September 2008. The acquisitions were important for environmental conservation and limiting development in the project area. Thus far, more than 3,400 acres have been set aside for conservation.

The design of CFX’s last sections was finished in 2015, followed by right of way acquisition and permitting. CFX and FDOT are building the parkway in sections, with the entire 25-mile toll road expected to be open to traffic by the end of 2023.

In addition to completing Central Florida’s beltway, the Wekiva Parkway (State Road 429) will provide travel alternatives. The parkway also will relieve State Road 46, US 441 and other area roads of traffic congestion resulting from intensifying growth and travel between Orange, Lake and Seminole Counties. It is also expected to improve safety and reduce vehicle crash fatalities, particularly on State Road 46.

A key goal for the parkway is to develop a transportation facility that minimizes impacts to Wekiva River Basin resources. This facility seeks specifically to improve wildlife habitat connectivity between conservation lands and reduce vehicle-wildlife conflicts. Environmentalists have hailed the Wekiva Parkway as a shining example for transportation planning through environmentally sensitive areas.

The parkway will help to protect area natural resources in several ways: